Transland president Roberto Rodriguez just returned from visiting one of Transland’s long time dealers.  Mid-Continent Aircraft in Hyati, MO has been around since 1949 and has been selling Transland parts for many of those years.

Dick Reade, Dennis Davis and Dennie Stokes with Mid-Continent were hosting one of the many stops of the Thrush Summer Tour which has given operators around the country the opportunity to see and test-fly the Thrush 510G aircraft.  Thrush representatives Terry Humphrey and Eric Rojek were on hand to demo the aircraft. 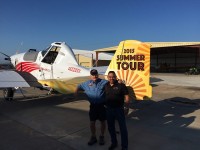